Eva Schloss is 90 years old and you would never know it. She is full of vitality and energy. She travels the world to tell her story.

Eva is a WWII Holocaust Survivor.

“The world is forgetting,” she states. “People who were deemed not worthy of living.” Whole people groups perished, and not only Jews. The Nazis gave grave meaning to the word genocide.

When Eva was here in Spokane last week, she sketched pictures in the minds of her audience the terrible days of living in the death camps. It boggled my mind. How can whole groups of people be abused, tortured and killed in such a way?

One true story we heard happened on a train. Jewish people crowded in the cars, heading toward their deaths. In the solemn hours, a cantor began to sing. He composed a haunting song looking forward to his Messiah. Little by little, voices joined his as the song wafted from heart to heart. Soon the car was singing. Then another car picked it up. And another.

A train full of condemned people raced across the European landscape, a song left in its wake.

It gave me goosebumps.

This very song is being sung in Jewish Synagogues all over the world. One Jewish man escaped with the music in his pocket.

God will get it done. Whatever it is. However it goes.

After WWII, “Never Again” became the rallying cry in the Jewish world as they re-established their homeland.

Yet, it IS happening again. Right now. In northwest China. To the Uyghur (pronounced Way-ger) people. The very same experiments on living people, work details until they drop, starving them, and finally, killing them.

What happened to “Never Again”?

So, what can we do? Pray is all I know for sure. I am not an expert; I am asking the questions.

How would I react? If it happened in my country. To my family and my friends. We must think about these things. Because they are happening despite us.

Even so, we are not without hope. Wherever evil flourishes, God plants hope.

He has given us a way of escape. Jesus Christ IS the Messiah—longed for in distant centuries past—and provided in recent centuries. He went to the cross to take on the sin of all of us and rose from the dead to provide eternal life for all who will come to Him. All.

He’s given His Word.

He’s given weapons for warfare, words to break evil.

He’s given us faith to believe in what He has already provided for us. When He is our Lord and Savior, we are safe forever.

In the end, Jesus Christ will return in triumph!

I delight in finding God’s presence in creatures and nature. He encourages me greatly in this way. My blog posts are often inspired by what I see around me. END_OF_DOCUMENT_TOKEN_TO_BE_REPLACED 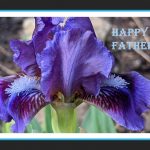 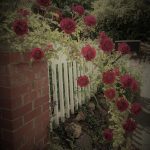 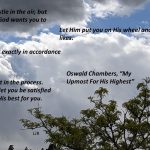